Nico has been carryng out catalyst handling activies, such as loading, unloading, screening. With the use of modern and tested secure techniques, equipment and communication systems, our NICO technicians are able to work in toxic and/or high safety standards are required when it is necessary to have inert atmosphere

Main activities that are carried out in this sector are:​

Nico has been the FIRST Catalyst Handling contractor in Europe, and one of the few worldwine who has worked jointly with EXXONMOBIL on the develpment of the “WET DUMPING BEST PRACTICE” and have already several year of experience with these specific services.

The Flow Bins are containers, available in the abilities of 1 and 2 m, registered for the transport of dangerous substances and also of pyrophoric catalysts. The use of such containers, manageable and of great ability, allows, in the phase of the catalyst unloading, a notable saving of time, being possible, in the case of reactors with more beds, to unload from the same contemporarily.

In the photo below we can see an example of unloading of a Reforming Reactor to three beds with the use of the Flow Bins.
As it is seen by the image, the three beds are contemporarily unloaded, making possible a notable saving of time. In this particular case, the reactor has been unloaded employing twenty-four in less in comparison to the traditional unloading in drums. 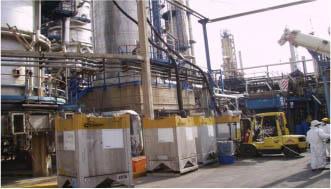